Routific compiled data from company and market reports to tell the story of how COVID-19 spurred growth across the food delivery market. 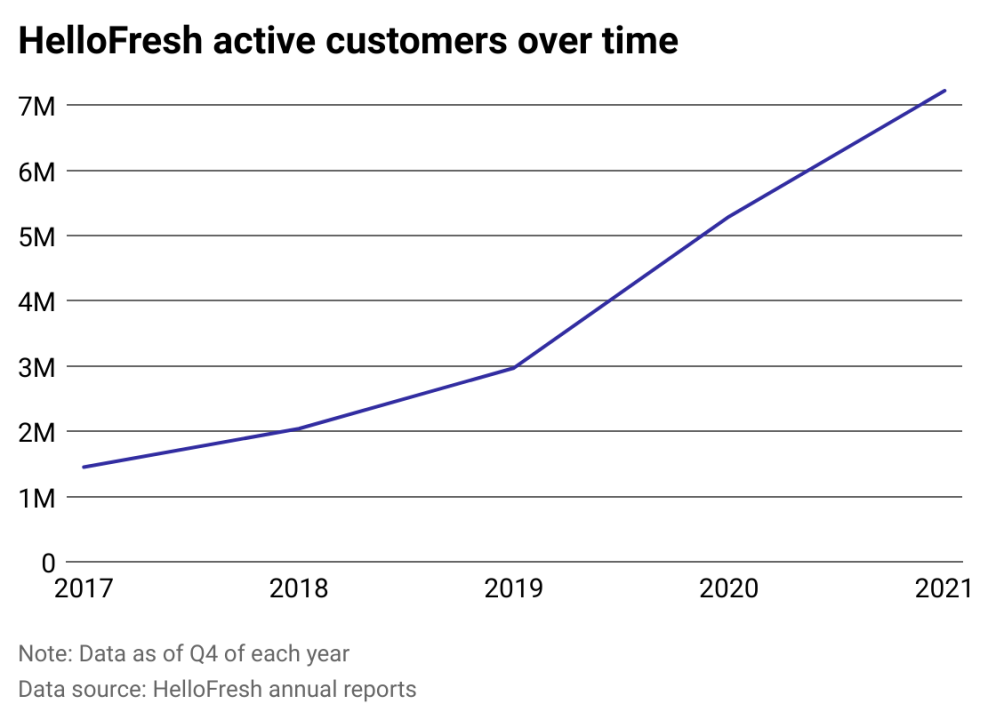 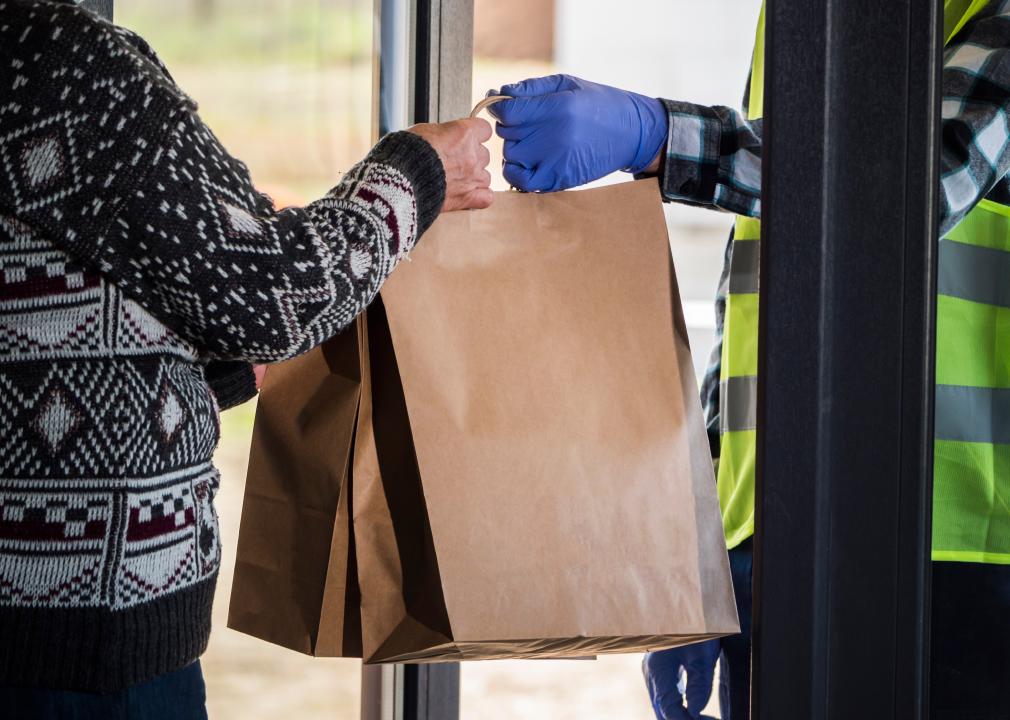 The COVID-19 pandemic upended entire industries as city shutdowns and work-from-home schedules brought traveling and outside dining to a sudden standstill. The hospitality, travel, and restaurant industries had to take drastic measures to stay afloat.

For restaurants, there was still a healthy demand for ordering food to eat at home. Meal delivery services saw massive growth as restaurants turned to platforms like Postmates and DoorDash to keep serving customers. One study published by the Columbia Business School found that the pandemic alone was responsible for 70% of the industry's growth from 2019 to 2020.

Many consumers also turned to meal kit subscriptions as a way to not just source food for meals, but also to make preparing and cooking their own food an entertaining activity. As meal kits grew in popularity, many companies in that space saw substantial growth.

Across the country, the pandemic shifted how we shop and eat. As the restaurant industry emerges from COVID-19, it remains to be seen which of these dining habits will drop in popularity—and which stick.

To better understand the far-reaching impact of the pandemic, Routific compiled this list of individual statistics and charts that together tell a story of how COVID-19 spurred growth across the food delivery market, from restaurant meal delivery to meal kits. Data is gathered from individual company reports and market reports from sources including PitchBook, eMarketer, and Edison Trends. 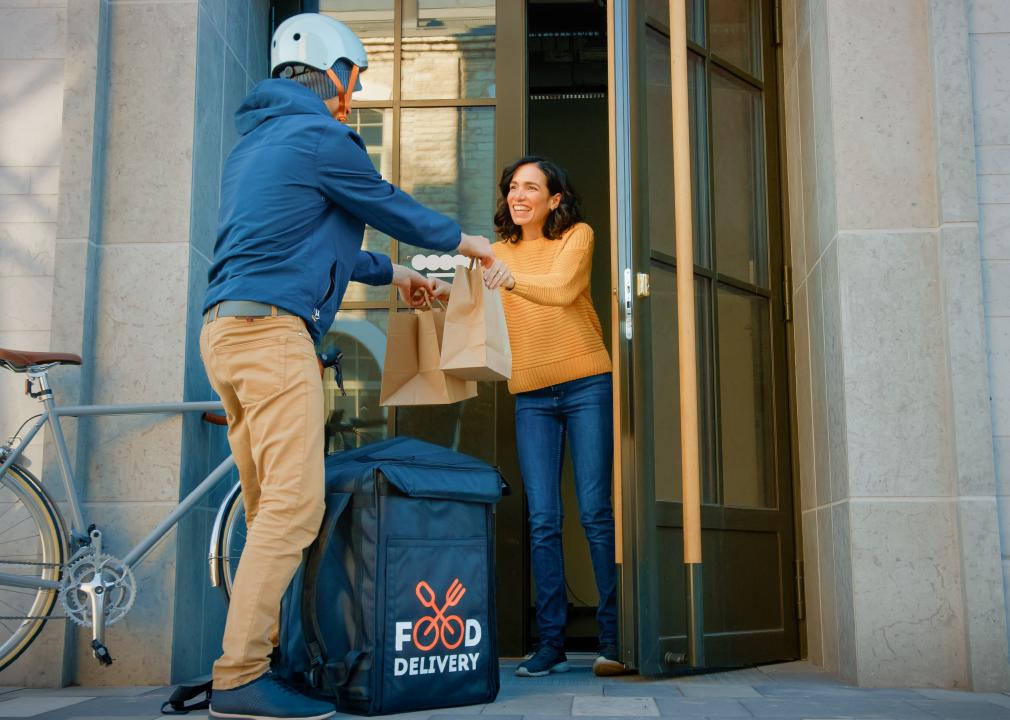 Prior to the pandemic, the U.S. food delivery service industry experienced a growth rate of 85% from January 2018 to February 2020, according to a report by e-commerce market research firm Edison Trends. Even in the face of such trending growth, the pandemic turned out to be a big turning point in the industry, remarkably spurring even higher increases than anticipated.

In the early days of the pandemic, people increasingly opted for food delivery instead of dining out. Restaurants leveraged food delivery services to outsource the task during a time when they were simply trying to survive. These two behavioral shifts combined to generate massive growth in the industry. From February to December 2020 alone, when restrictions and lockdowns were first implemented, food delivery transactions grew a stunning 96%, indicating that the pandemic was responsible for this meteoric growth. 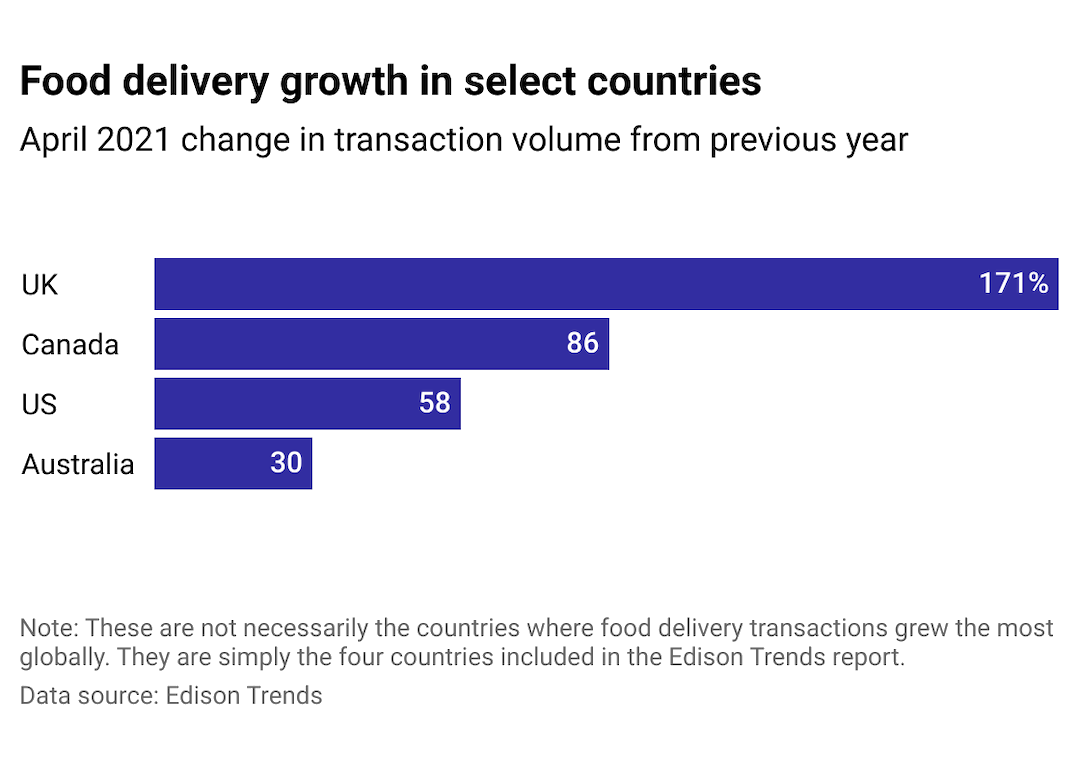 The pandemic had a similar effect in other countries as well. The same Edison Trends report included annual growth year-over-year from April 2020 to April 2021 for four countries: the U.S., U.K., Canada, and Australia.

The report found that the U.K.—which had a string of "stay at home" orders from March 2020 to December 2021—had a massive increase in food delivery service usage. Not only did more people switch to food delivery, but they also spent more each month on it as well.

Although some think the trend is here to stay—even after the preponderance of COVID-related lockdowns and restrictions has passed—people in the U.K. are starting to return to in-person dining, which may force restaurants and food wholesalers to rethink their sales strategies once again. 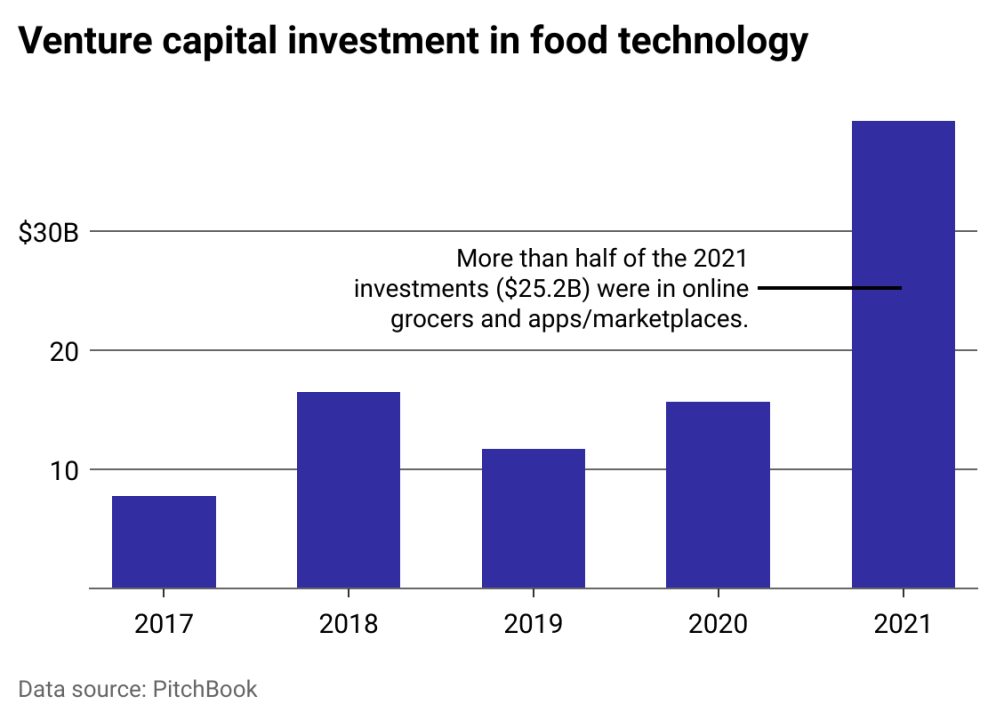 Venture capital investments in food-related technology hit $39.3 billion in 2021, according to a report by private market research firm PitchBook. "Food tech" is a broad category that includes bioengineered foods, suppliers, technology, discovery, and intermediaries and delivery. But more than half of 2021 food tech VC was invested into online grocers as well as apps and marketplaces (restaurants and other food delivery) to help them build a competitive infrastructure. Those categories received $18.4 billion and $6.8 billion in investments, respectively.

While food tech investments overall waned in the first quarter of 2022, momentum continued for food intermediaries and delivery services, which garnered more than $2 billion across 74 VC deals, according to another PitchBook report. Many of these investments go toward improved convenience, addressing changes in consumer dietary preferences, food personalization efforts, and leveraging robots to ease labor shortages. 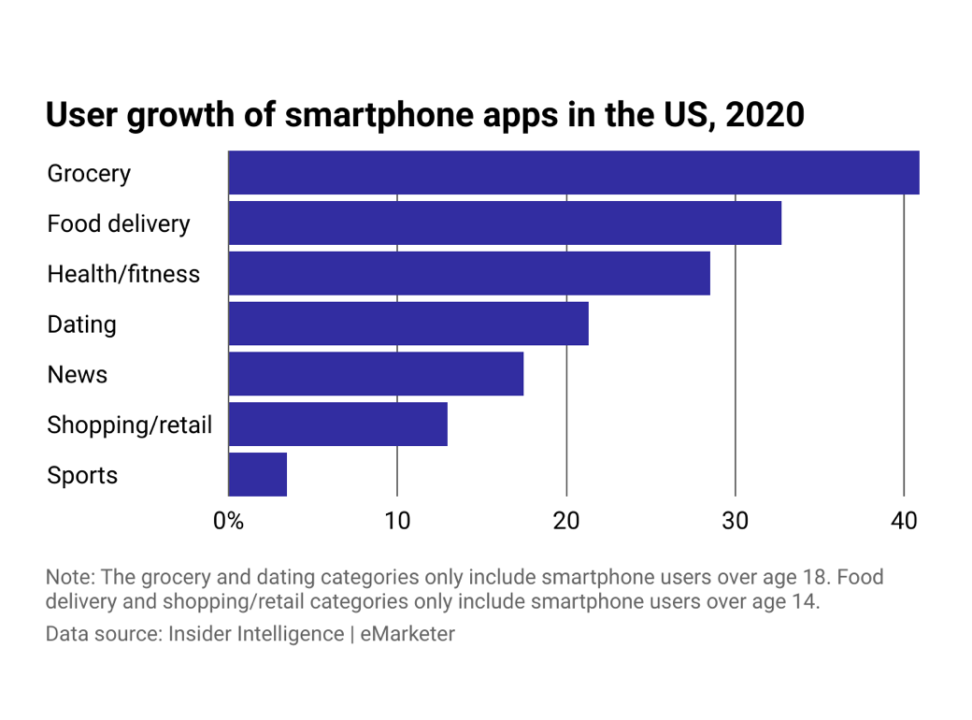 During the pandemic, the importance of smartphones increased as people used them for staying in touch with others, gaming and entertainment, and getting basic needs. The pandemic spurred a rise of interest in using grocery and food delivery services, and consumers started downloading these apps in droves.

According to research firm eMarketer, grocery app downloads increased more than 40% in 2020, with Instacart being a main player in this category. Food delivery service apps like Uber Eats, DoorDash, and Grubhub grew nearly 33%.

Analysts don't think this trend will last, however, after seeing a slowdown in 2021. 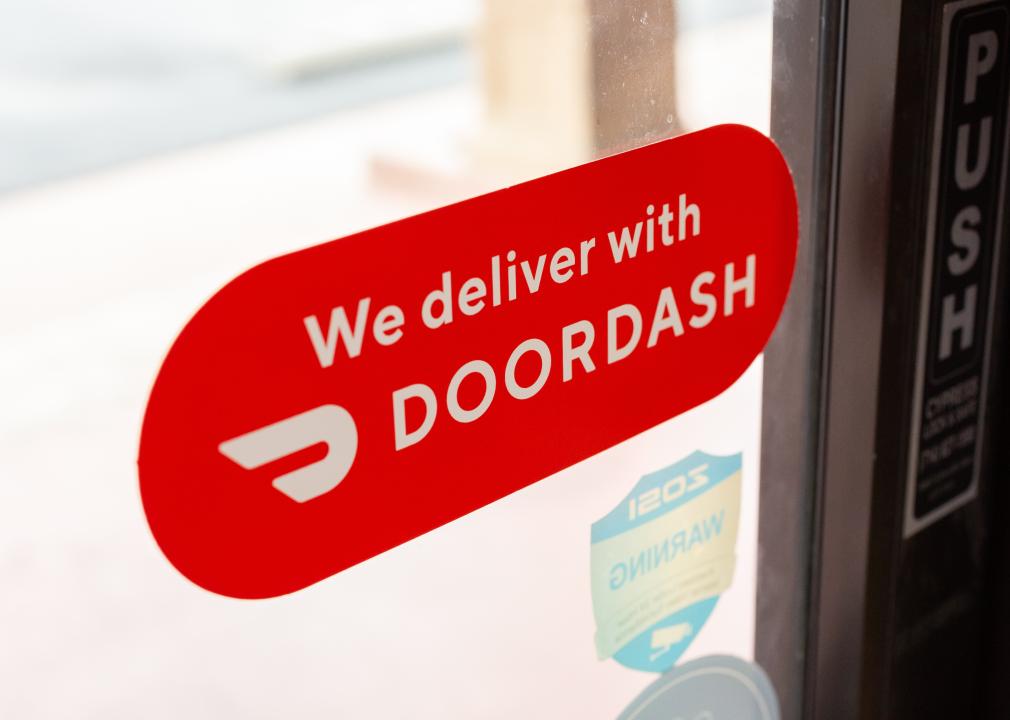 DoorDash, a food delivery leader, had a massive initial public offering fueled by the pandemic. DoorDash stock opened at $102 per share on Dec. 9, 2020, on its way to a first-day close at $189.51. It was one of the largest IPOs of 2020, fueled in part by investors' belief that even though DoorDash was losing money, it was a safe stock bet because of consumer behavior during the pandemic.

Although its stock had fallen to $71.32 as of close on July 11, 2022, DoorDash is nonetheless experiencing revenue growth. In its first quarter 2022 earnings report, the company's revenue rose 35% to $1.46 billion, higher than analysts' predictions. Although the company's growth rate is not as high as it was during the height of the pandemic, consumer usage is still strong despite restaurants and stores reopening, an indication that consumer behavior has changed. 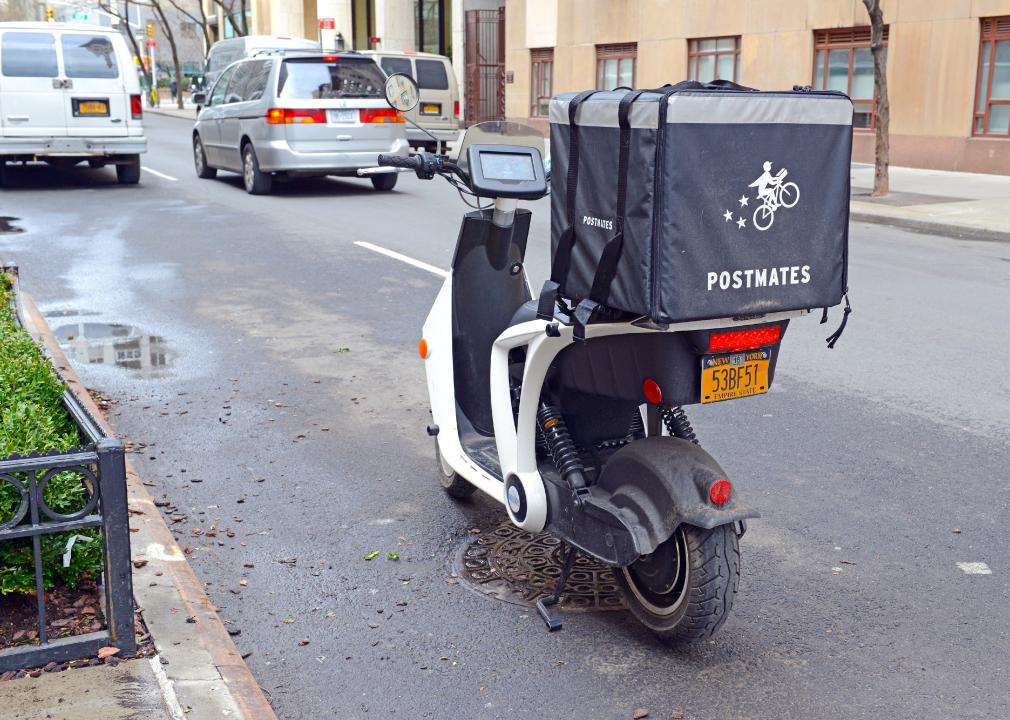 As food delivery was gaining momentum during the pandemic, food delivery marketplaces looked to acquisitions as a strategy to gain market share. In July 2020, Uber acquired rival Postmates, just before Postmates went public. The deal allowed Uber to expand its geographic footprint, as well as its service offerings, as Postmates also delivered other items in addition to food. Uber became the second-largest food delivery service in the U.S. with the increased market share the deal gave the company.

In an even larger merger, Just Eat Takeaway acquired Grubhub in an all-stock deal valued at $7.3 billion 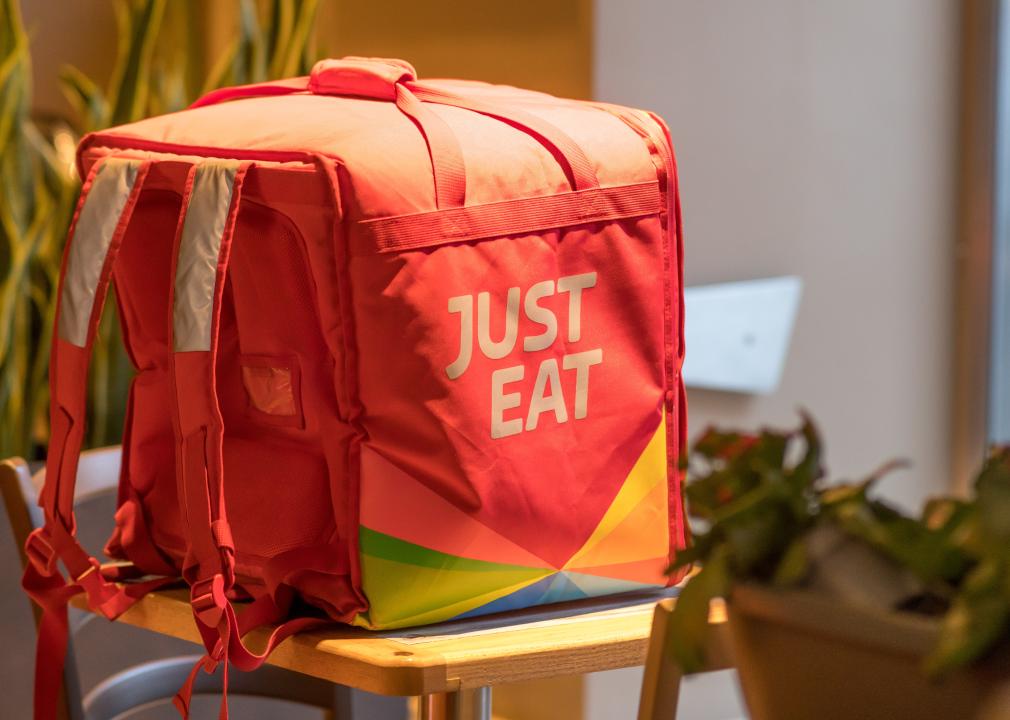 As food delivery was gaining momentum during the pandemic, food delivery marketplaces sought to gain market share through acquisition, and in 2020 Grubhub was a big target. When price and regulatory issues halted Uber's potential acquisition of Grubhub, Just Eat Takeaway stepped in for this $7.3 billion acquisition, which was announced in June 2020. The deal gave the European entity—which had been formed by a merger of Just Eat and Takeaway.com earlier in the year—a presence in the United States. The deal closed on June 15, 2021.

This merger may have proven to be a mistake, however, as less than a year later there are rumors that Just Eat Takeaway may sell off GrubHub amidst the threat of a global recession. A lack of synergies between the two entities and a shift in consumer behavior in different parts of the world that's caused a downturn in order volume are some of the reasons behind the potential divestiture. 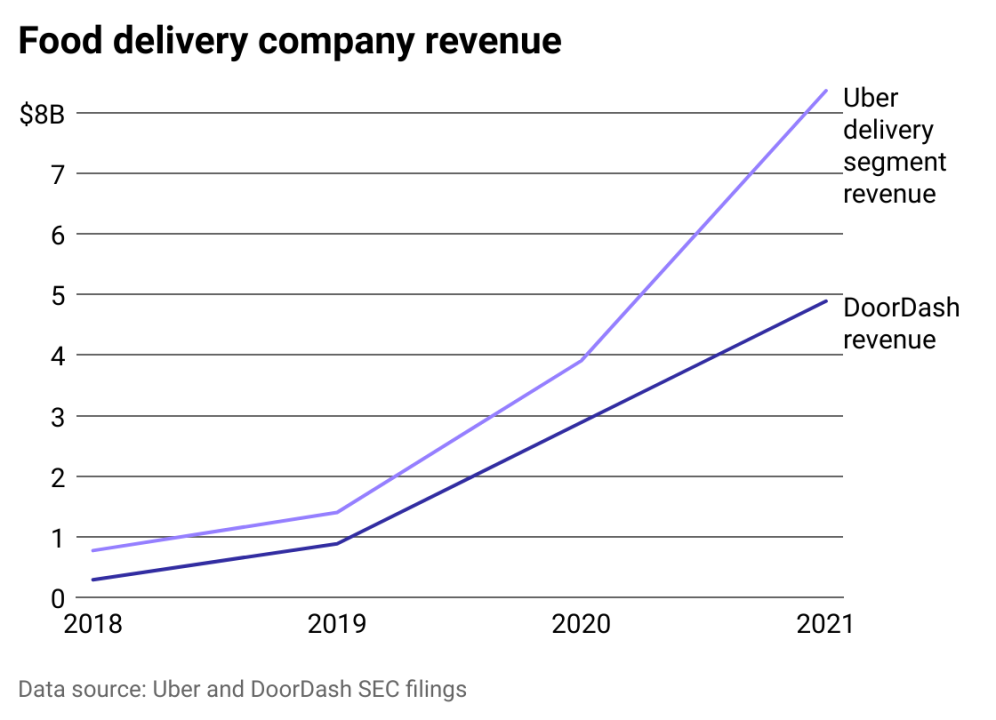 Uber's delivery revenue grew 81% between 2018 and 2019—healthy by any standard—but from 2019 to 2020 that rate pole-vaulted to 179% as more people ordered takeout amid COVID-19. Uber's delivery segment is still attracting new customers to its platform. Uber Eats revenue now exceeds that of its ride-hailing arm, reaching $8.3 billion in 2021, a 72% year-over-year increase.

DoorDash also increased its growth rate, though to a lesser degree. From 2019 to 2020, the company's revenue rose from $885 million to $2.88 billion. Although that growth has slowed, the company is now earning more revenue in one fiscal quarter than it did in all of 2019. The growth rate for U.S. meal kit subscription sales nearly doubled in 2020, and since then has skyrocketed with 2022 estimates approaching $7.63 billion. Meal kits accounted for nearly 20% of subscription e-commerce sales, and they have continued to gain share of the subscription category since the pandemic bump.

Growth has since slowed in this segment, but it hasn't stalled: eMarketer projects that meal kit subscription sales will increase another 17% in 2022. That's faster than the 15% growth rate expected for the subscription market as a whole, according to the report.

From 2019 to 2020, meal kit market leader HelloFresh came close to doubling the rate at which it grew its customer base. It added 2.32 million customers that year, growing to 5.29 million active customers. The onset of COVID-19 certainly contributed to the uptake, as that growth rate has since stabilized.

Consumers' return to pre-pandemic life hasn't resulted in a loss of customers though. In fact, HelloFresh's customer base is still growing, albeit at 36.5% from 2020 to 2021, which is a lower growth rate than pre-pandemic levels. Still, that marked an additional 1.93 million active users on the platform.

This story originally appeared on Routific and was produced and distributed in partnership with Stacker Studio.