How Ivy League endowments have grown over the past two decades

Using data from the U.S. Department of Education, EDsmart examined how much the Ivy League endowments have grown over 20 years. 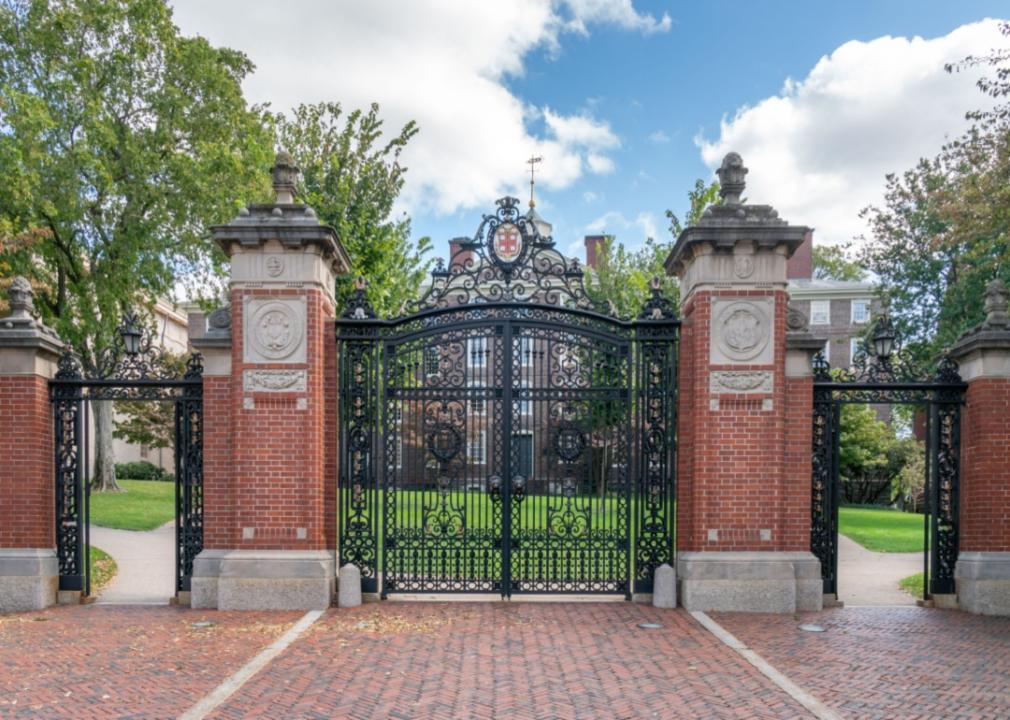 University endowments are funds that have been donated to academic institutions, either by an individual or organizations. They are primarily used to offset operating and administrative costs, fund scholarships and professorships, and ensure the operational stability and longevity of the institution. While Harvard University has the largest university endowment in the country, Harvard's grew at a slower rate than most of its Ivy League peers.

The largest 1% of university endowments grew from an average of $2 billion to $20 billion between 1980 and 2016, after adjusting for inflation, according to a Washington Post column authored by Charlie Eaton, a University of California, Merced sociology professor. In his book "Bankers in the Ivory Tower: The Troubling Rise of Financiers in U.S. Higher Education," Eaton writes that elite universities invest large amounts in private equity and hedge funds headed by their alumni.

EDsmart examined data from the U.S. Department of Education to find how much endowments at Ivy League universities have grown over two decades between 2000 and 2020, the latest data available. Universities are ranked by the percentage of increase. 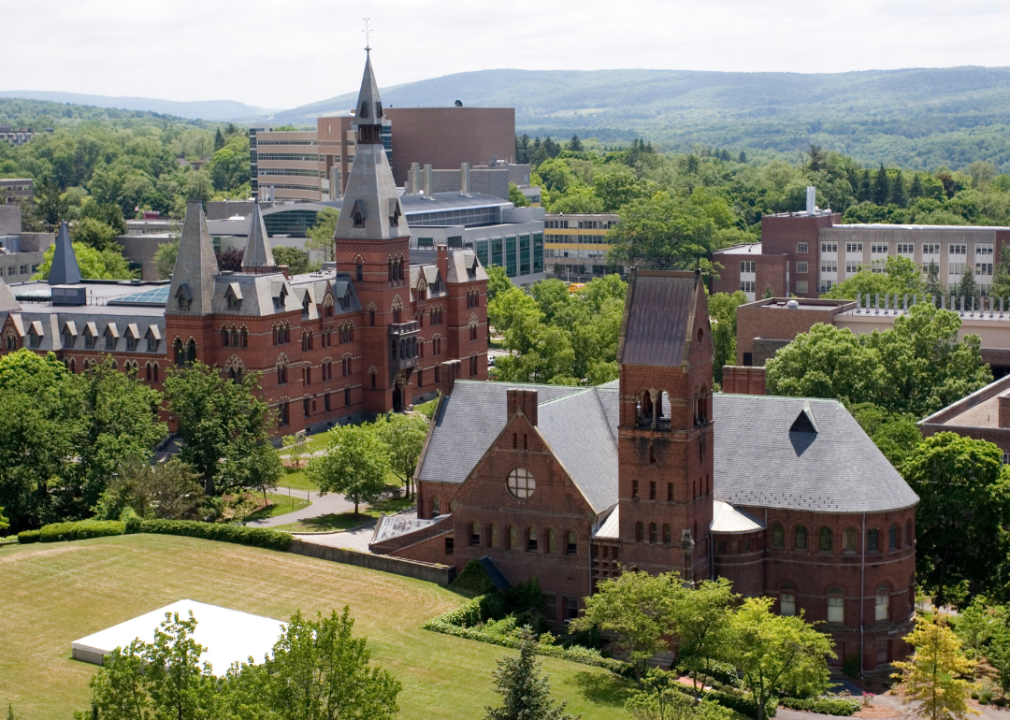 A privately endowed university, Cornell University is also the federal land-grant institution of New York. Its original mission under the Morrill Act of 1862 was to teach agriculture, military tactics, the mechanic arts, and classical studies so that working-class students could receive a liberal arts and practical education.

Cornell established the first four-year schools for hotel administration and industrial and labor relations, awarded the country's first degree in veterinary medicine, and was the first to offer a degree in American studies.

The university boasts at least 50 Nobel laureates affiliated with the school either as faculty or alumni. Among Cornell's famous former students are Superman actor Christopher Reeve; U.S. Supreme Court Justice Ruth Bader Ginsburg; Janet Reno, the first woman to serve as U.S. attorney general; and the writers E.B. White and Kurt Vonnegut. One of its graduate has earned the nickname the "James Bond of Philanthropy:" Charles Feeney of the class of 1956, had given his alma mater $1 billion in funds as of December 2020, according to the Cornell Daily Sun. Feeney, who co-founded Duty Free Shoppers, made many of his donations anonymously. 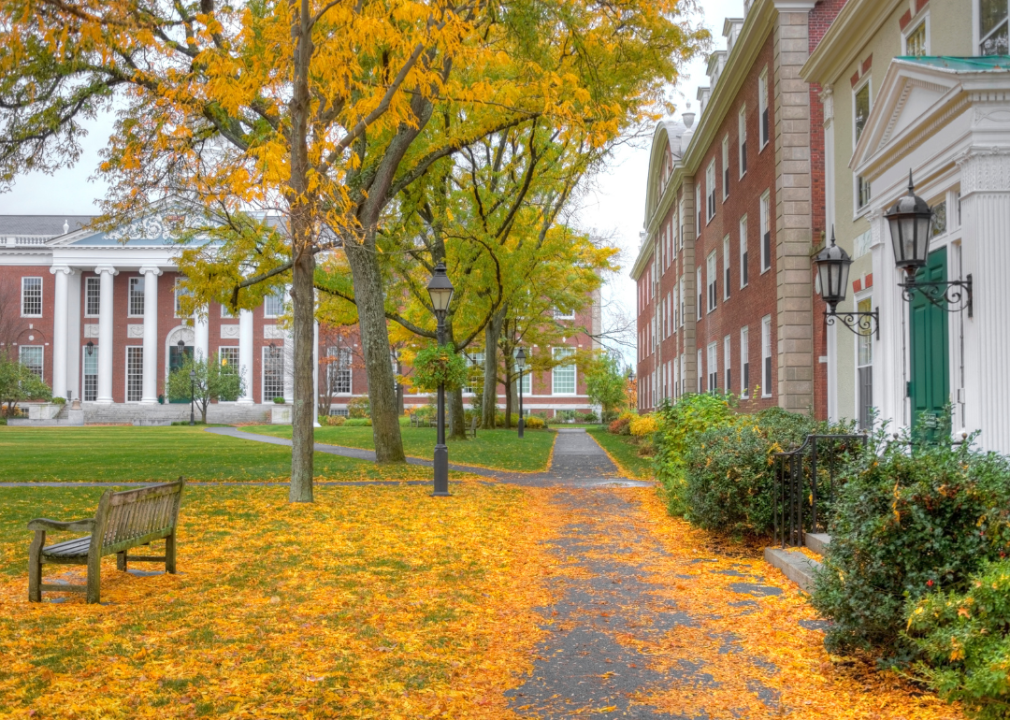 Harvard was the first college founded in the American colonies, when the "Great and General Court of the Governor and Company of the Massachusetts Bay in New England" approved £400 for its establishment. Its namesake was John Harvard, who received his M.A. from Cambridge University in England and who later willed his library of 400 books and half his estate to the college. Increase Mather, a Puritan minister who was involved in the Salem Witch Trials and who served as president of Harvard College, was awarded the school's first Doctor of Divinity degree in 1692. 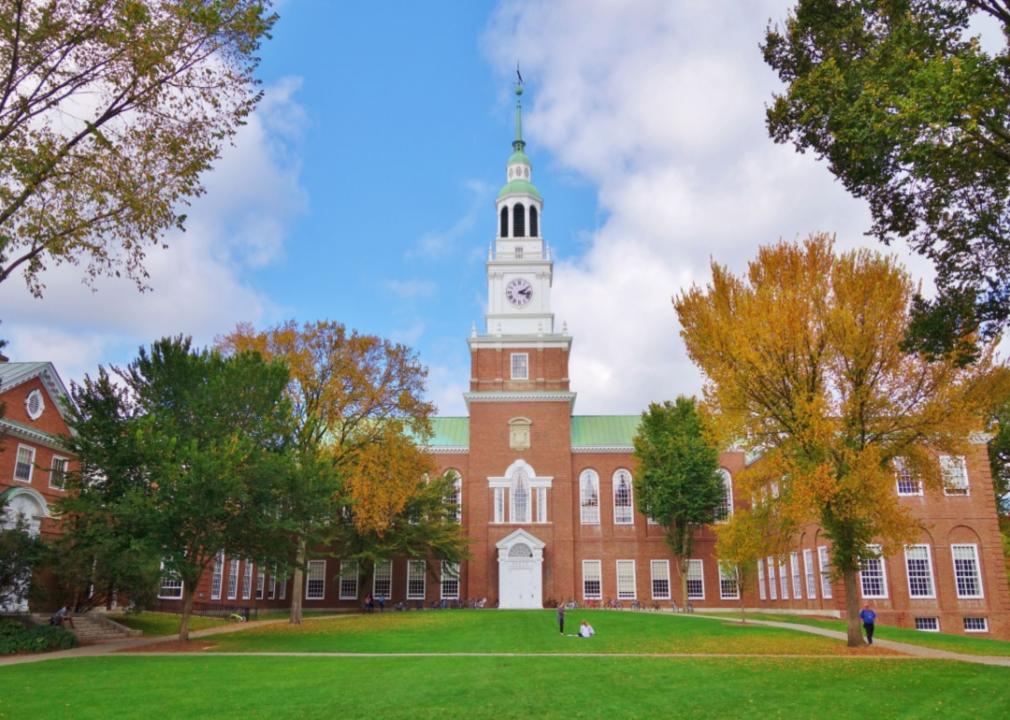 Dartmouth College was established to educate Native Americans, English youth, and others, though in its first 200 years it did not meet that first commitment. Samson Occom, a member of the Mohegan tribe and one of the first students of the college's founder, Congregational minister Eleazar Wheelock, helped to raise the money for the school.

In 2022, Dartmouth's Tuck School of Business announced a $52.1 million pledge from an anonymous donor, the largest ever received. 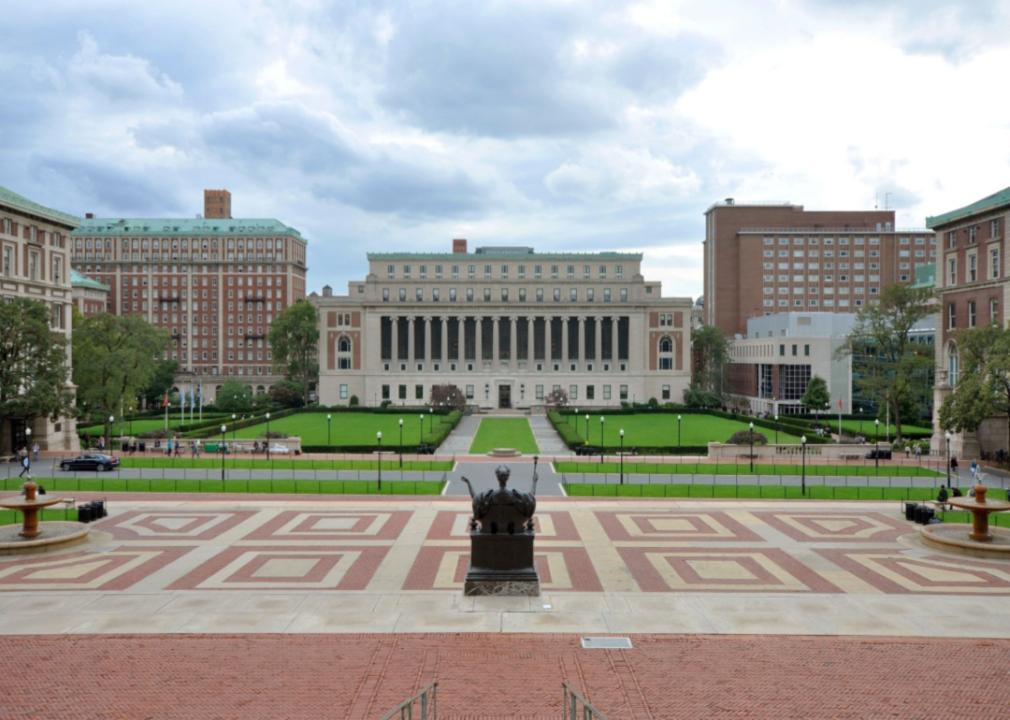 Columbia University was originally named King's College, founded by a royal charter of King George II of England. After closing in 1776, it reopened in 1784 as Columbia. Among the earliest students were John Jay, the country's first chief justice; Alexander Hamilton, the first treasury secretary; and Gouverneur Morris, the author of the final draft of the U.S. Constitution. 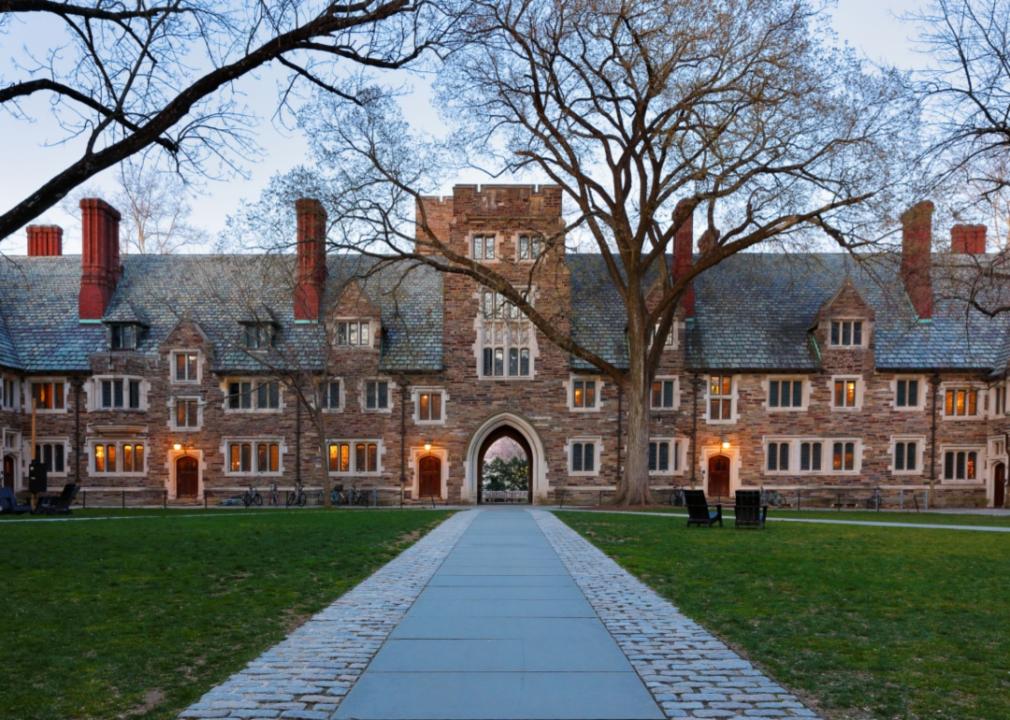 The university was founded by the Presbyterian Synod as the College of New Jersey in Elizabeth, and moved twice before it was deeded 10 acres in Princeton. A president of the college, John Witherspoon, signed the Declaration of Independence in 1776. In 1783, the Continental Congress met in one of the college's buildings, Nassau Hall, which served as the temporary U.S. Capitol.

Albert Einstein had his office on the campus as a member of the Institute for Advanced Study, though it had no formal ties to the university. Like other Ivy League institutions, Princeton's roster of notable alumni is impressive and includes former President Woodrow Wilson, actors Jimmy Stewart and Brooke Shields, former first lady Michelle Obama, Lisa Najeeb Halaby (the former Queen Noor of Jordan), consumer activist Ralph Nader, and Amazon founder Jeff Bezos.

In 2015, musicologist and philanthropist William H. Scheide donated nearly $300 million worth of rare books and manuscripts to the school, including the first six printed editions of the Bible, a handwritten music sketchbook from Beethoven, and the original printing of the Declaration of Independence, CNBC reported. 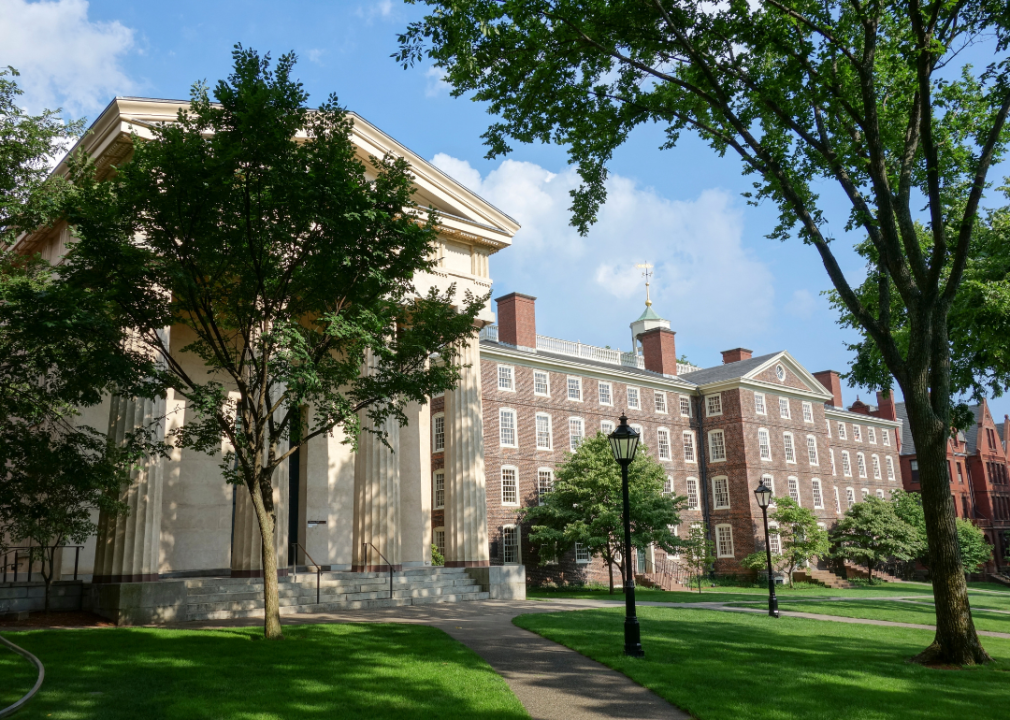 The university's founding can be traced to 1762, when a group of Baptist leaders meeting in Philadelphia settled on establishing a Baptist university in New England and chose Rhode Island, which was without a college. Despite those origins, the charter approved by the state two years later noted that it would be a liberal institution without religious tests. The Brown family, which funded its creation in Providence, gave the college its name. 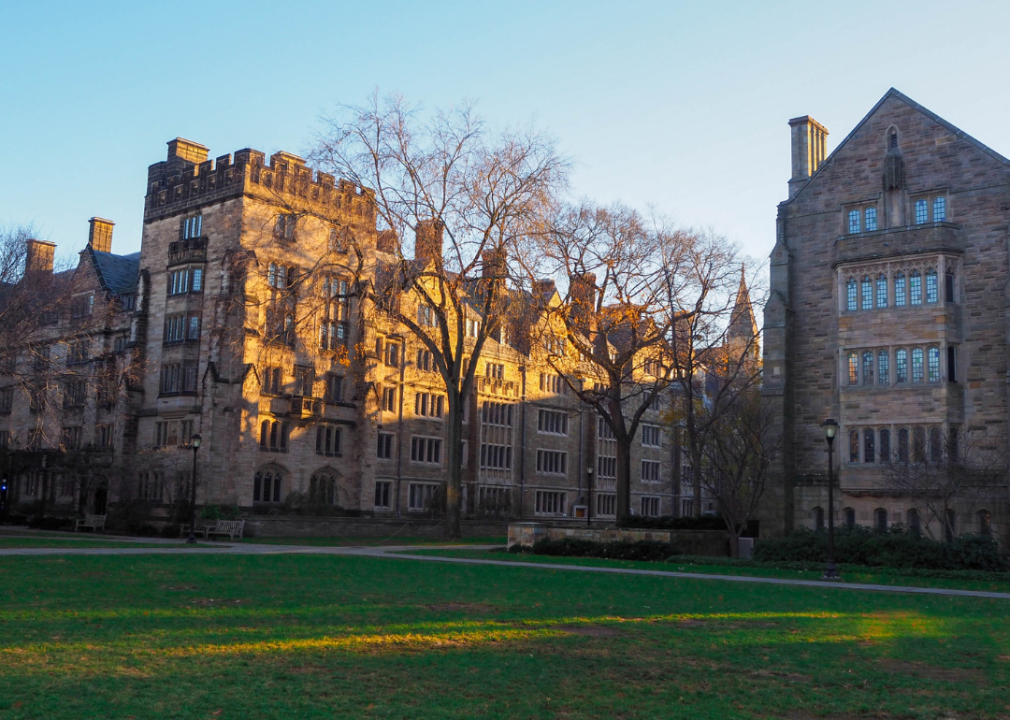 Clergymen began work on creating a college in the European liberal tradition in the 1640s. Its charter came from the Connecticut legislature in 1701, and it became Yale College in 1718—named after a Welsh merchant, Elihu Yale, who sold nine bales of goods for its benefit and donated 417 books and a portrait of King George I. The first Yale bulldog, the school's mascot, dates from 1889, when student Andrew B. Graves bought him from a New Haven blacksmith for $5. 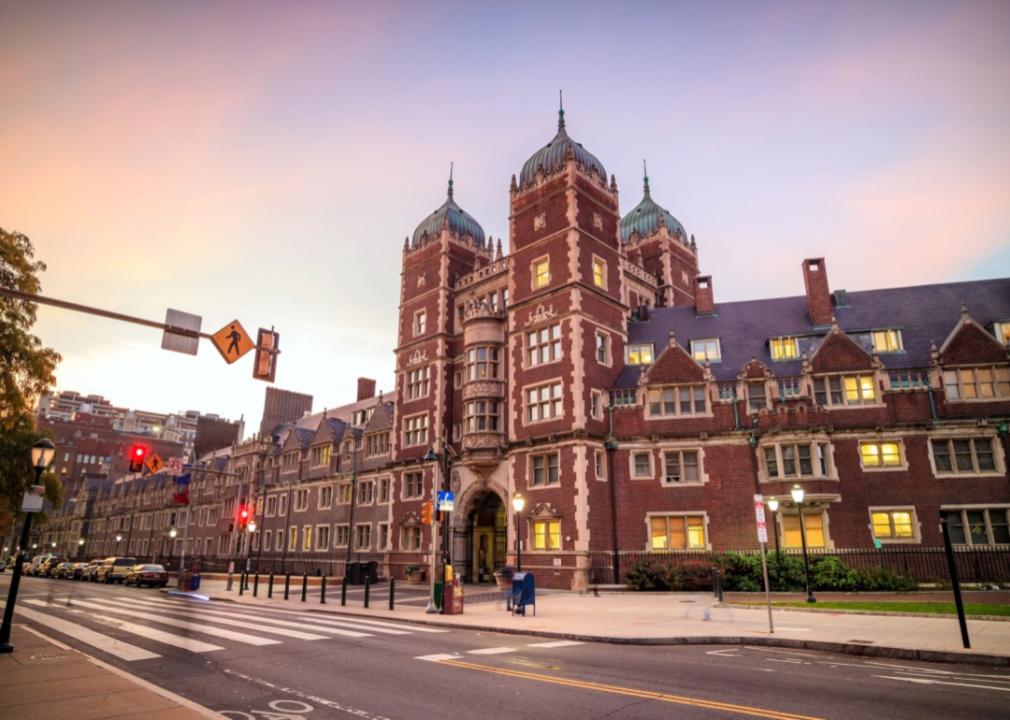 The origins of the University of Pennsylvania lie in a 1740 plan for a Philadelphia charity school, but the building languished for a decade when it proved too expensive to build. In 1749, Benjamin Franklin led the organization of a school based on his publication, "Proposals Relating to the Education of Youth," and a group bought the building. Franklin was the school's president until 1755.

Former President Donald Trump was a student at Penn, as were musician John Legend, billionaire Warren Buffet, Tesla and SpaceX founder Elon Musk, and former Supreme Court Justice William Brennan Jr. In 2021, the university received an anonymous gift of $5 million in bitcoin, the largest cryptocurrency donation it had received.

This story originally appeared on EDsmart and was produced and distributed in partnership with Stacker Studio.